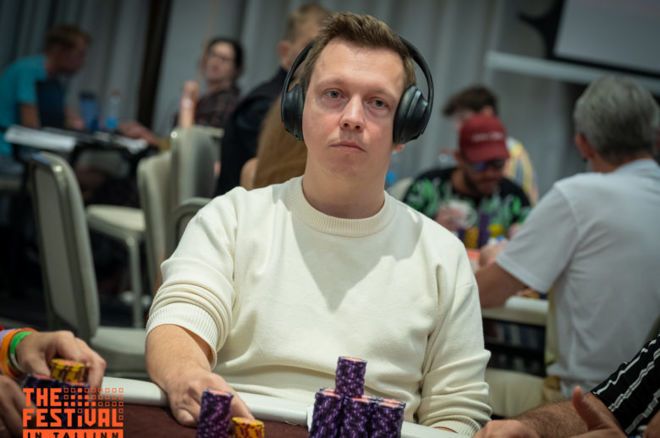 Eirik Kristiansen hold the chip lead going into the final table of The Festival Tallinn Main Event after the 30 players who sat down on Day 3 were reduced to only nine. Each of those nine finalists is now guaranteed €3,950 for their efforts but one of them will walk away with an impressive €56,100 for their €550 investment.

Norway’s Kristiansen is guaranteed to best his previous largest score regardless of where he finishes. Should he finish in the top five, he will walk away with his first five figure haul.

There was a steady flow of eliminations on Day 3, starting almost immediately after play resumed. Henri Wagner was the first casualty of the day, his queen-jack failing to get there against the ace-four of Lars Viggander. Leinonen busted in 30th place while Viggander ultimately progressed to the final table.

Kristiansen eclipsed one million chips during Level 21, when his pocket kings prevailed against the king-jack of Eric Wasylenko.

Day 1A chip leader Stefan Bittger busted in 19th place when his ace-six failed to improve against the dominating ace-ten of Inigo Naveiro.

Kristiansen won another substantial pot when he flopped a set of deuces and was paid off by Juhanan Leinonen who turned top pair. The Norwegian added another one million chips to his stack in the levels following that big bpot.

The final table was set during the 25 level of the tournament. Oleksandra Shenderei open-shoved for 12 big blinds from late position with pocket fives, and Rando Liiber called in the big blind with ace-jack. An ace on the flop and jacks on both the turn and river, busted Shenderei in tenth place, and brought the curtain down on Day 3 proceedings.